Curtains made by Sartorial Soft Furnishings are bespoke and made just for you. There is a full choice of headings that can be made to fit your window’s design. It is even possible to make curtains to fit shaped windows or deceive the eye by making short windows look longer or wide windows narrower. 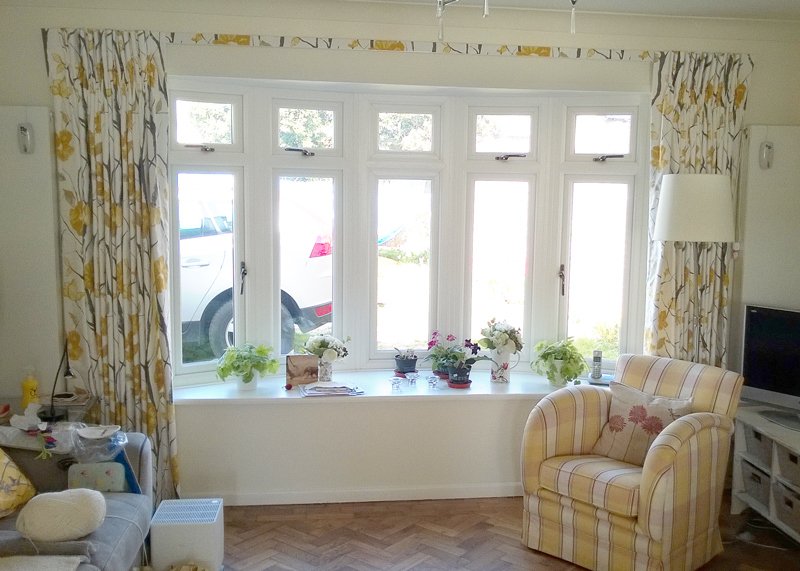 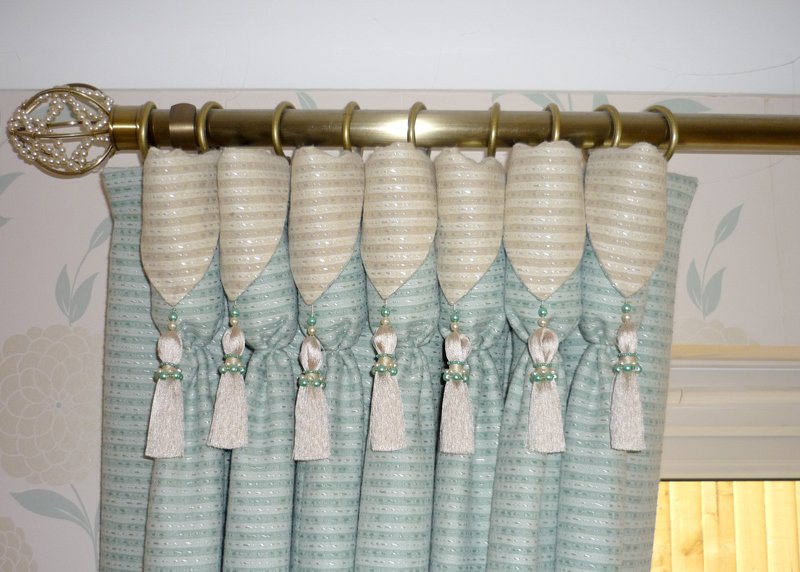 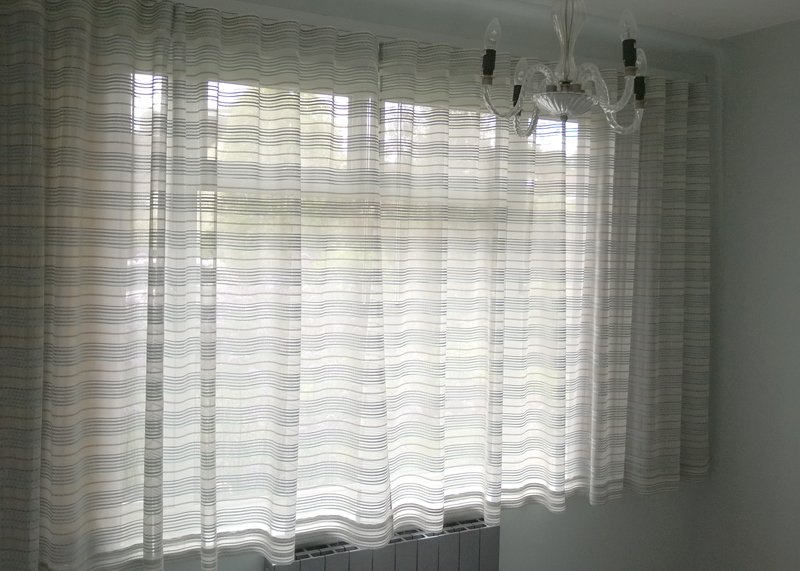 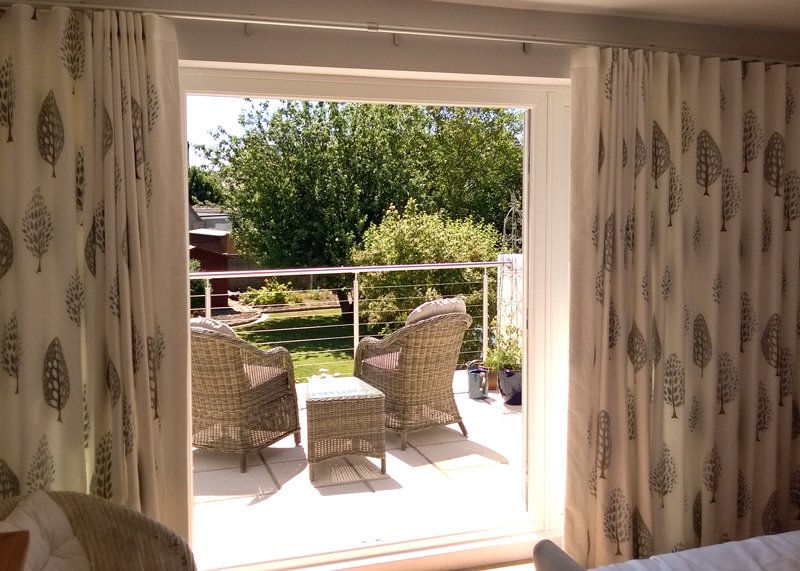 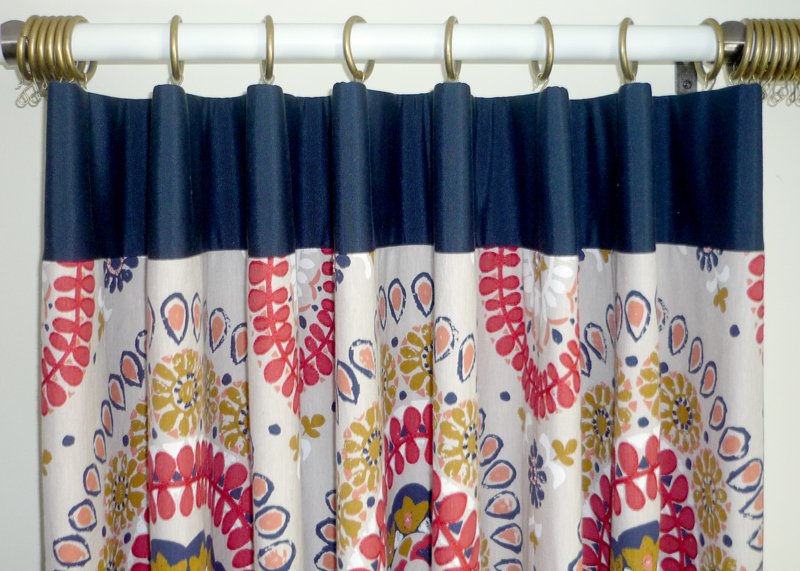 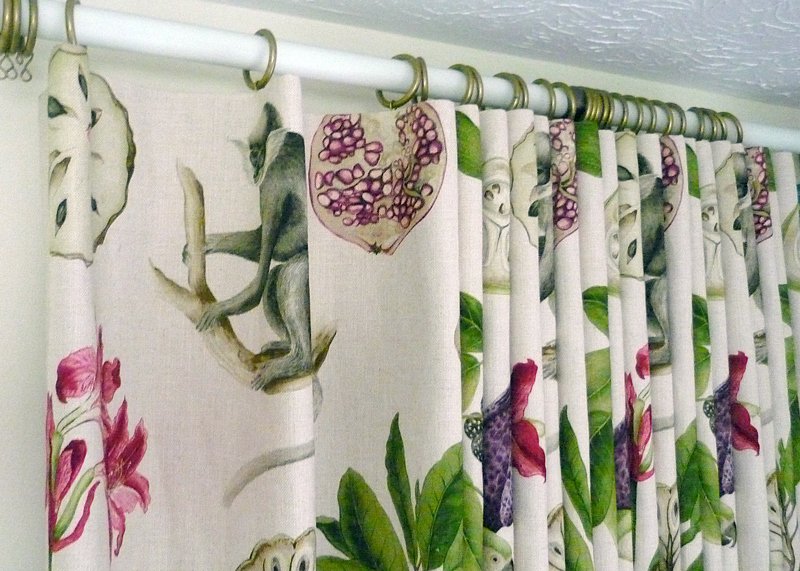 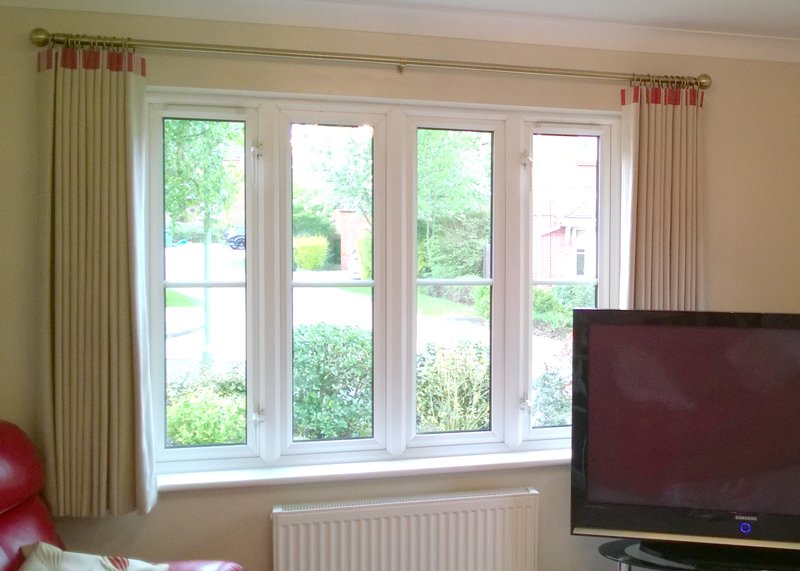 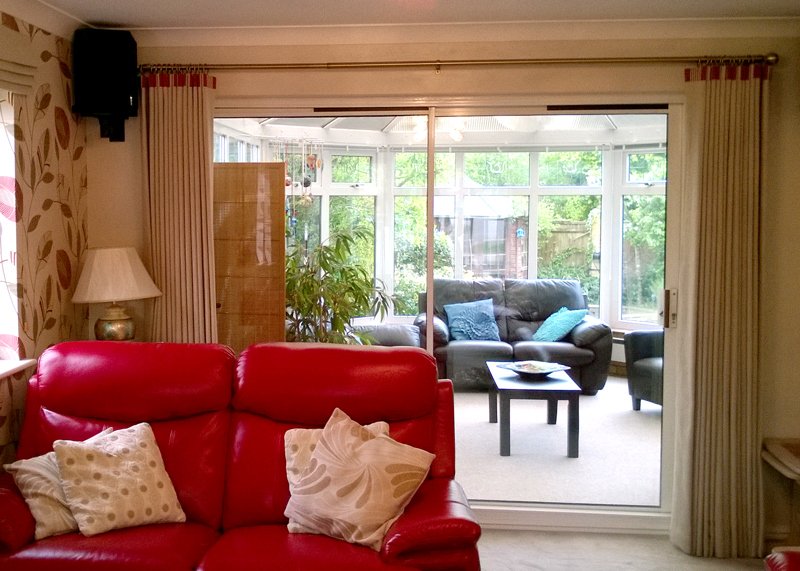 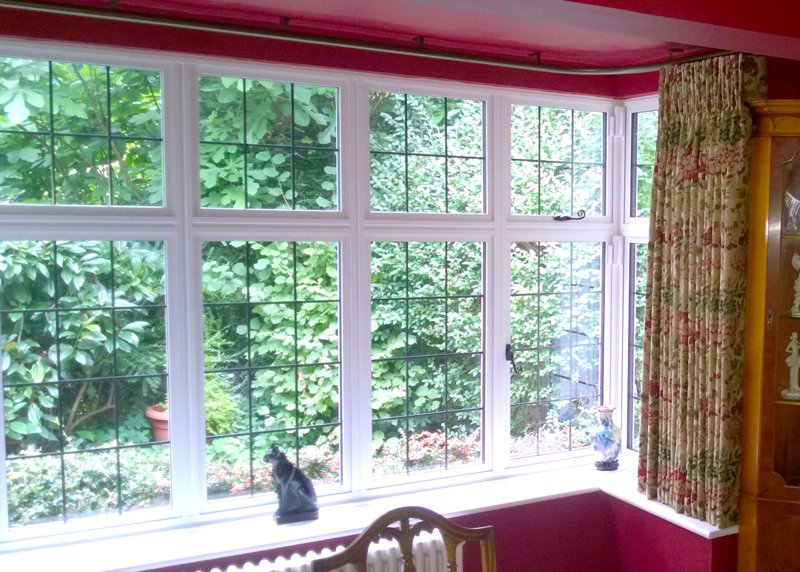 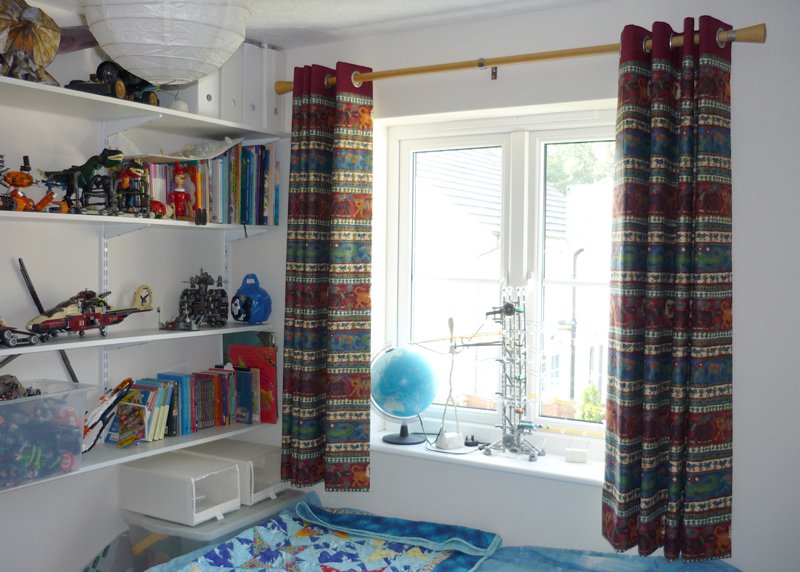 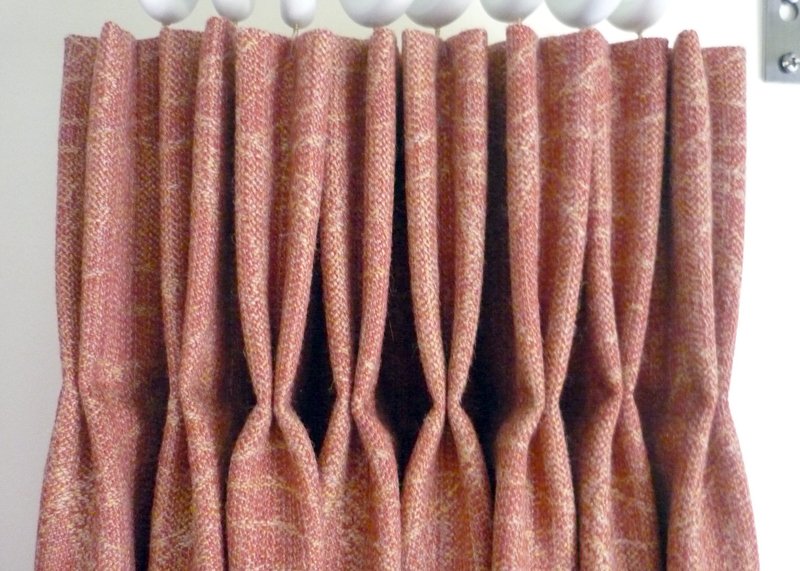 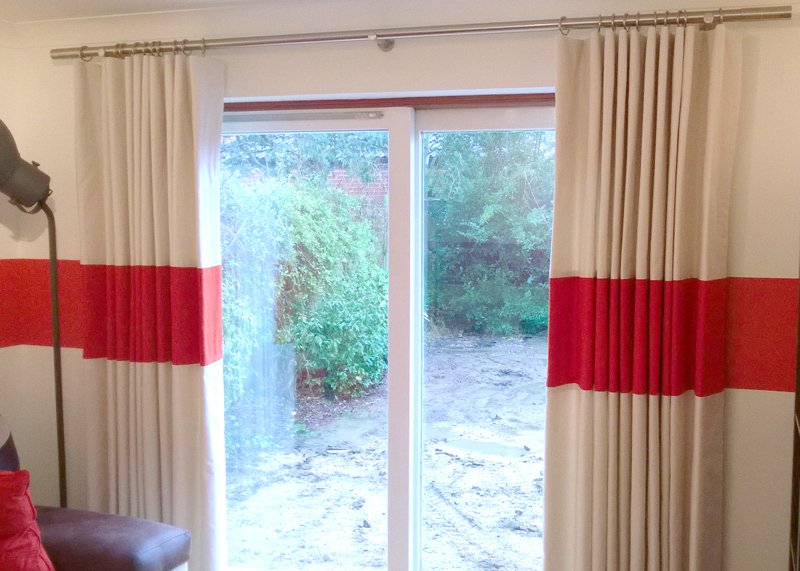 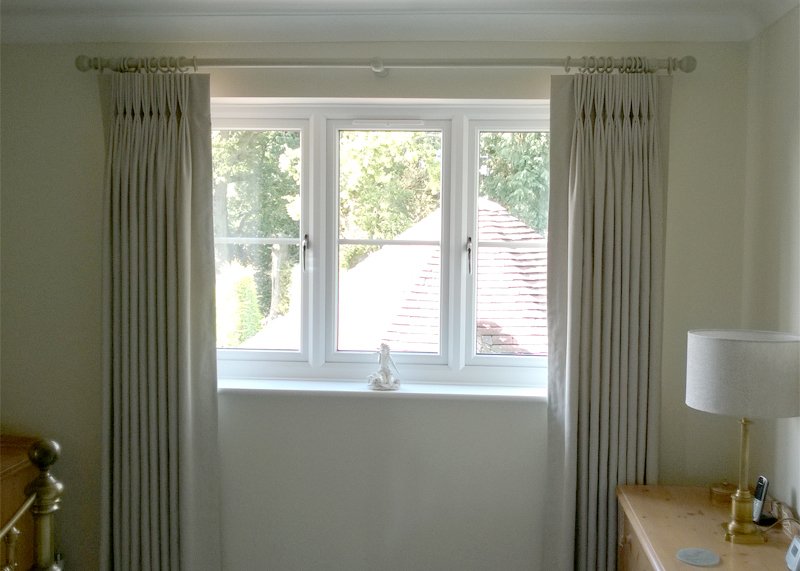 There are two methods for finishing a curtain top, Taped and Hand finished .

The most widely used Taped heading is pencil pleat. The fabric is gathered into small pleats, similar to a row of pencils, by tape attached with two parallel rows of stitching. This is a basic and quick heading and could be used for hanging curtains from a rail or pole.

The random effect of Pencil pleat tape can be used as part of the design of a pair of curtains. Curtains can be given a frilled heading by setting the tape down from the top, then when gathered the extra fabric forms a frill. The fabric above the tape can also be stuffed with net to create a puffed heading. My particular favourite is to make the frill oversized and let it fall over the front of the curtain to form an attached valance. This can be shaped or in a contrast fabric to enhance the design.

Other taped headings include:

A hand finished heading gives you much more choice and scope to give your curtains something extra. Contrast edges, decorative features or just interlined, the choice is yours.

These are the classic design giving a clean crisp finish to your curtains. They can be enhanced with buttons or tassels and look good with contrast bands to emphasize the pleating.

They are particularly suitable to fit to a pole as the fabric between each pleat folds underneath when the curtain is stacked back, and because of the formal pleats they stay in place after each opening and closing.

Triple pleats, also known as French pleats or Pinch pleats, are created by forming a pleat at the curtain top which is then folded and stitched into shape.

Double pleats need less fabric across a width than Triple pleats and can be a good way of keeping costs down depending on the size of your window.

Inverted pleats are made the same way as the other pleats but backwards to give a contemporary unfussy finish.

Constructed in the same manner as Triple/Double/Inverted pleats a ‘Goblet’ is formed instead of the smaller pleats. Because of the cylindrical shape of the pleats there is more opportunity to bring in design elements such as cut away to show a contrasting inner, or cuffed to give the curtain more dimension.

Goblet pleats require the same amount of fabric as the other pleats, and they also sit better on a pole where the pleats can fold to the back.

Another variation of the goblet pleat is the Cuffed goblet. A “cuff” is added to the top edge of the pleat which then falls over the front of the goblet. As with the Cut-away pleat this is an opportunity to add a contrasting fabric and you can add design detail with a matching tassel.

As the name suggests the heading is created by hand either individually pleated with smocking or by sewing channels for the pole or rod.

Hand pleated Pencil pleats and Smocked heading are very time consuming and are therefore an expensive finish, however a Slotted heading is quite simple and one of the less costly options available.

These heading don’t have as much movement so they are most suited for static or dress curtains.

These heading have generally less fullness than the others and can be good way to save money if you would like to use a more expensive fabric. Because they need to hang from a pole or rod they are unsuitable for use with a rail, and movement can be limited so they are often found as static curtains, however an informal heading can be given many design features and could almost be seen as a blank canvas. Designs include Eyelets, Tab and Tie tops.

Curtains made by Sartorial Soft Furnishings will have hand sewn hems with weighted, mitred corners, and unless the design calls for otherwise, a lining attached using hand stitching. These traditional methods guarantee a quality finish and curtains that hang beautifully.

Depending on your choice of fabric you could choose to have your curtains interlined. This is when a thicker layer of fabric (interlining) is sandwiched between the main fabric and lining. It is particularly desirable when the curtains are made from a lighter weight fabric as it gives them a much more sumptuous look and feel. Interlining curtains also increases insulating properties and is very useful for draughty windows.

As standard I use a crease and light resistant lining which drapes beautifully, it is slightly heavier than most linings and will complement any fabric.

For bedroom curtains or other areas where light coming through the curtains needs to be minimized I would suggest a blackout lining. If you require extra insulation but don’t want your curtains interlined, thermal lining could be used.

We are so pleased with the curtains. They hang so much better and keep the room much warmer. Thank you very much.

Just wanted to say thank you very much for the curtains you delivered on Friday. They are made so well and look really good. The service you provide is top notch and we will definitely bare you in mind for the future.